Why can Anti-Virus and incremental backups interfere with CLIPxe functioning well?

Written by Dave Tucker Sr.
Updated over a week ago

There are many functions that are going on in your computer constantly.  You can see them by right clicking on the task bar and then clicking on Start Task Manager.  You will see something like this: 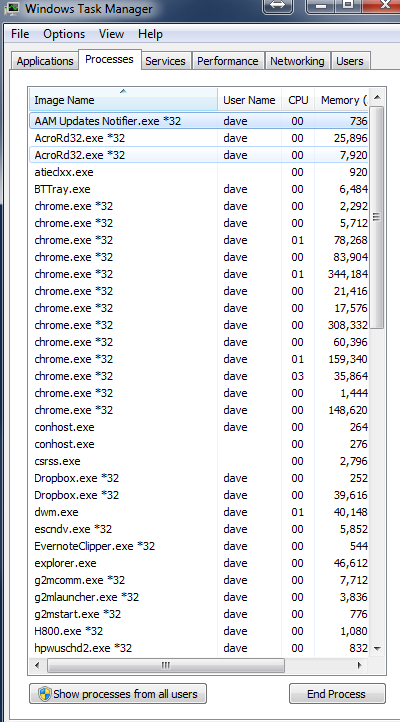 As you can see, we are only seeing the processes down to the "h"s.  It goes alphabetically to "z." There a lot of processes going on even if you don't have anything open on your computer!

Windows is supposed to keep everyone happy and not let any single program interrupt any other one. The two BIG exceptions to this are Anti-virus and Incremental Backup programs.

The Anti-Virus programs are made to interrupt the smooth flow of data into and out of your computer. Think about them like toll booths on the highway of information.  Every packet that goes into and out of your computer goes through these toll booths.  The Anti-Virus (AV) program examines each packet of information and decides whether it will let it go by or not.  If the AV "police" suspect that the packet of information is a possible virus, it detains it for further "questioning."  At times it will stop it from going through completely, and at other times it will re-arrange the data before allowing it through.

Because AV has to be constantly updated to deal with the most current threats and updates, downloads happen in the background without your knowledge. This means that something that was working just fine yesterday could have problems today.  AV software doesn't ask you for permission to update, it just does it.

What does this have to do with CLIPxe? CLIP is working just fine, but when it asks for a piece of data from the server the data gets held up by the AV toll booth.  Some times it just delays the functionality, but at other times it might deny the information completely. This will generate an error message in CLIP which is usually "FILE ACCESS DENIED" because CLIP asked the server for information but was denied because of the AV.  Because the AV is working in the background, it never tells you that it killed the data and thinks it has done its job. In the mean time, your CLIP starts "acting up" and giving you strange errors that it never did before.

So, what do you do?  Well, for most AV programs you can set exclusions for the CLIP folder and all files. That would be the first step.

There are some AV programs that are becoming very aggressive. Among these are "End Point", "Vipre", "Kaspersky", Webroot, AVG, AVAST and others. These programs seem to ignore exclusions set by the user and continue to interfere with CLIP and cause errors and crashes through various features of the AV program, including behavioral and heuristic scanning. In Avast and AVG's case, the security software will even close the program once it launches in around 15 seconds, then open it again. On launch, CLIP is loading various databases and editing records--terminating it suddenly will eventually cause corruption. The best solution we've found with these programs is to simply not use them anymore and uninstall them in favor of a different security software such as Windows Defender on Windows 10 machines.

The ones that seem to work best are Microsoft Security Essentials and Windows Defender. With the proper settings, Avast *might* work as well.

Footnote: VIPRE is owned by END POINT, and they are basically the same thing.

What about Incremental Backups?

Incremental backups also interrupt the flow of data. The idea behind them is that if you could backup files as they are being used, you would be able to constantly have a "current" backup. The problem is that you cannot copy a file when it is open on a workstation and being used. In order to accomplish this, the incremental backup program will put a temporary hold on the file while it copies it. If this happens during a process that CLIP is trying to access, edit, and save information, it will generate an error.

Examples of "bad" incremental backup systems are ones that run constantly.

We recommend that your use case be something like schedule daily backups being done at 3am or so every day.

Errors that CLIP reports when this is happens are:

FILE ACCESS DENIED - The operating system has denied CLIP its request for information.  Basically, the toll booth has not let the information through.

C000005 - This is a general operating system error - it means that something has gone awry in Windows (usually due to an anti-virus).

INTERNAL CONSISTENCY ERROR - Something in the operating system has "stomped" on the memory that was reserved for CLIP.
Errors on transferring invoices to QuickBooks. This process sometimes changes addresses and information on the header part of the invoice.  Once the AV software is un-installed, it works fine.

There are other ones that can pop up but these are the main ones.

Anecdotal events.
This came from a customer that was having strange problems and followed the advice in this article:
"Just wanted you to know I spoke to my IT guy and he made CLIP an exception to malware bytes and everything started working again. So, it was the Malware Bytes- apparently. Thank you for the heads up and if anything changes I will get back with you. I also have a password for you to get on next time. "

A company in New York had strange problems recording work, but once they uninstalled the Anti-Virus software everything worked fine.

A related situation was with a company with a substantial number of crews, they wrote the following:
"I finally got FoxFix working on the server. The Data Execution Prevention (DEP) was blocking the DLL from being loaded. So supp.exe needed to be added to the exception list for the system to allow the exe to load that dll. I went ahead and added vclip.exe also in case that was causing any other issues without our knowledge."
You can see how setups in security can affect the smooth running of CLIP.

Did this answer your question?